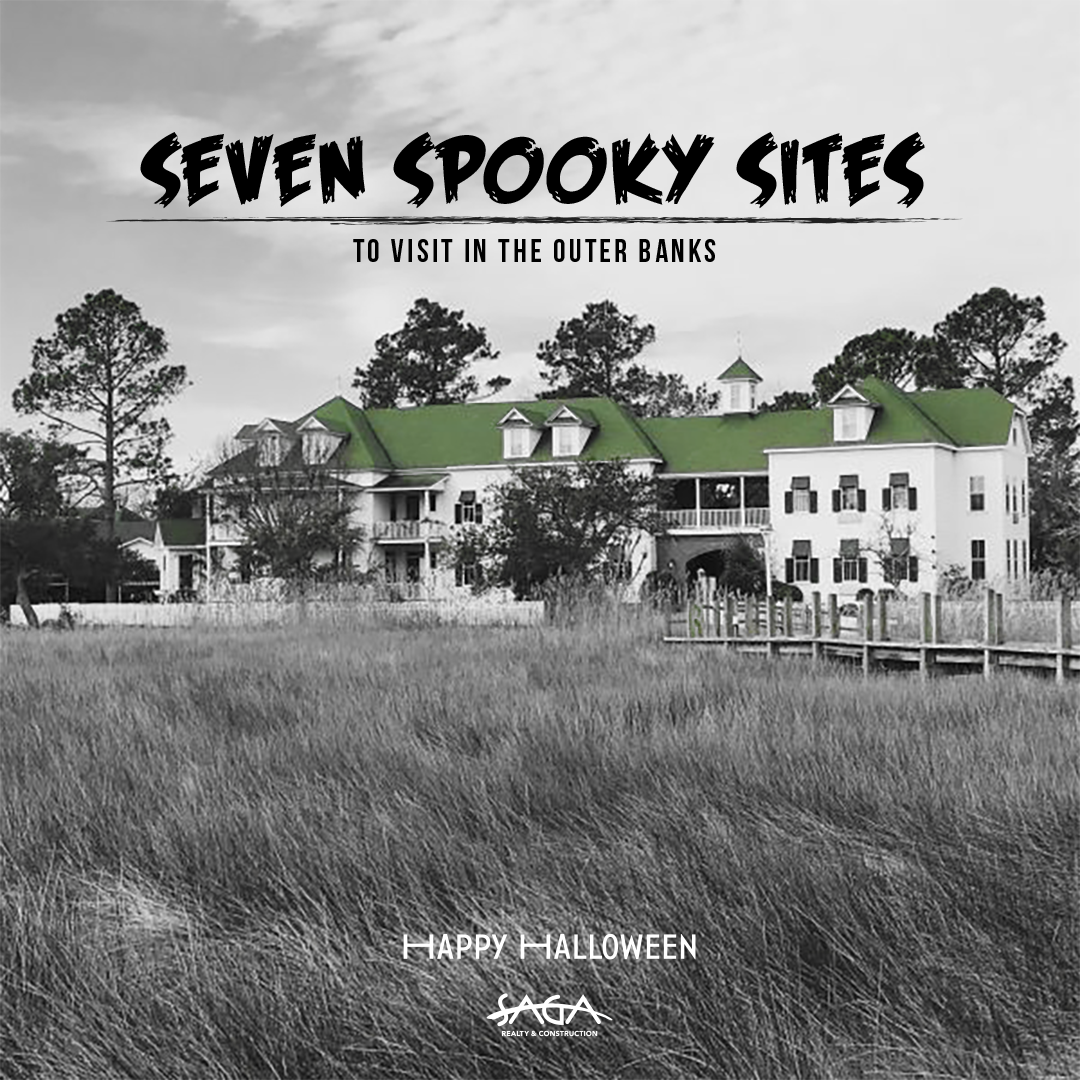 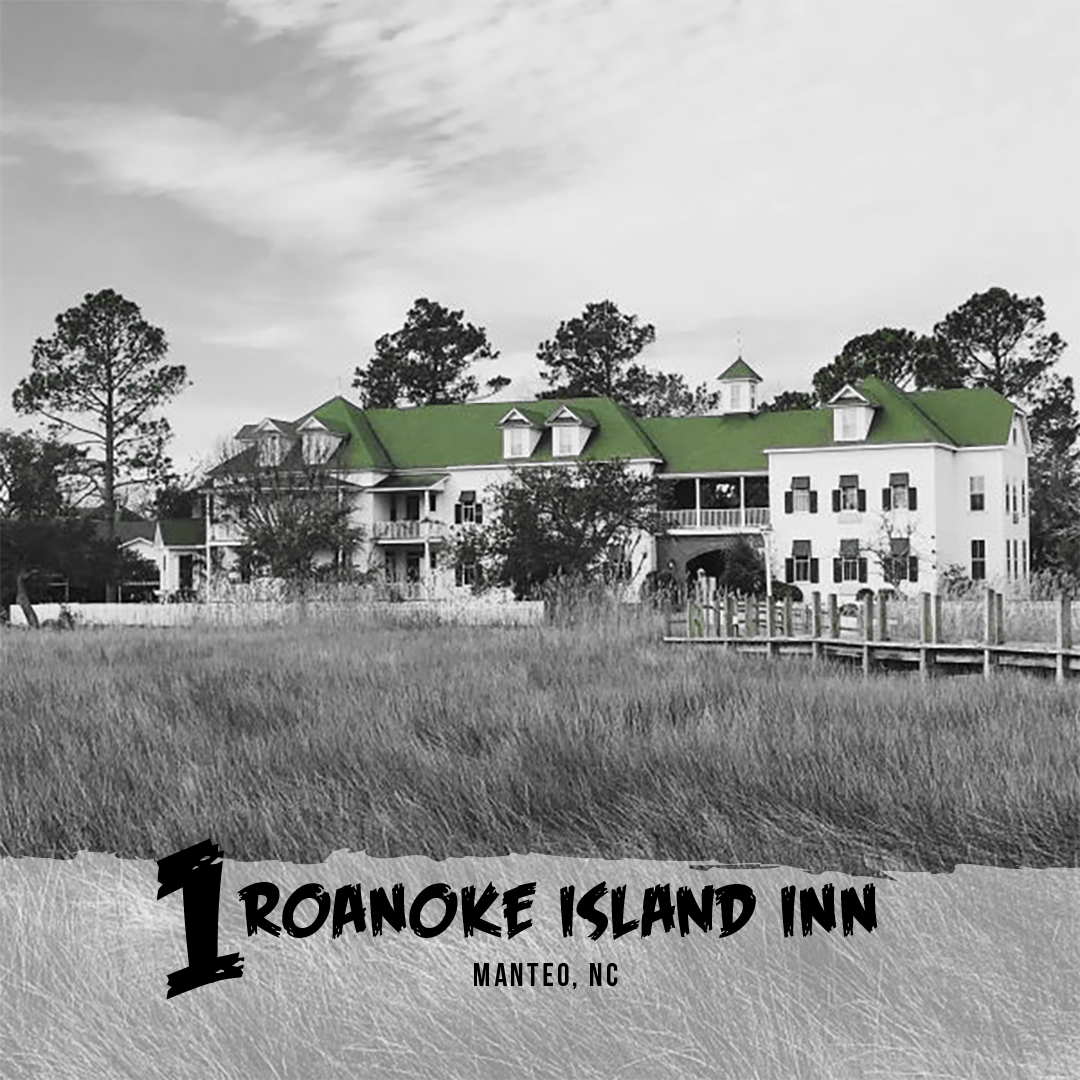 Now owned by John Wilson, the great-grandson of the hotel’s original constructor, the historic Roanoke Island Inn is known for more than just it’s serene gardens and stunning architecture. Many guest and visitors of the boutique hotel have reported strange and unusual activity during their stay, such as mysterious footsteps, flying vases, and radios having a mind of their own.

Legend has it that all of this suspicious activity is at the hands of the hotel’s former and deceased owner, Mr. Roscoe Jones. Roscoe was a Manteo NC local, who worked as a postmaster for the U.S. Postal Service, until he was unexpectedly terminated without reason.

Feeling ashamed, humiliated, and betrayed by his former employer, Roscoe shut off from the outside world and locked himself in a room at the Inn; where he was later found deceased after months of isolation.

Not long after his death, the ghost of a man in a postal uniform was regularly spotted on the grounds of the hotel, and according to the unusual guest reports, he is still roaming the hotel’s halls today.

Don’t believe it? See for yourself, and book a stay at The Roanoke Island Inn: https://roanokeislandinn.com/ 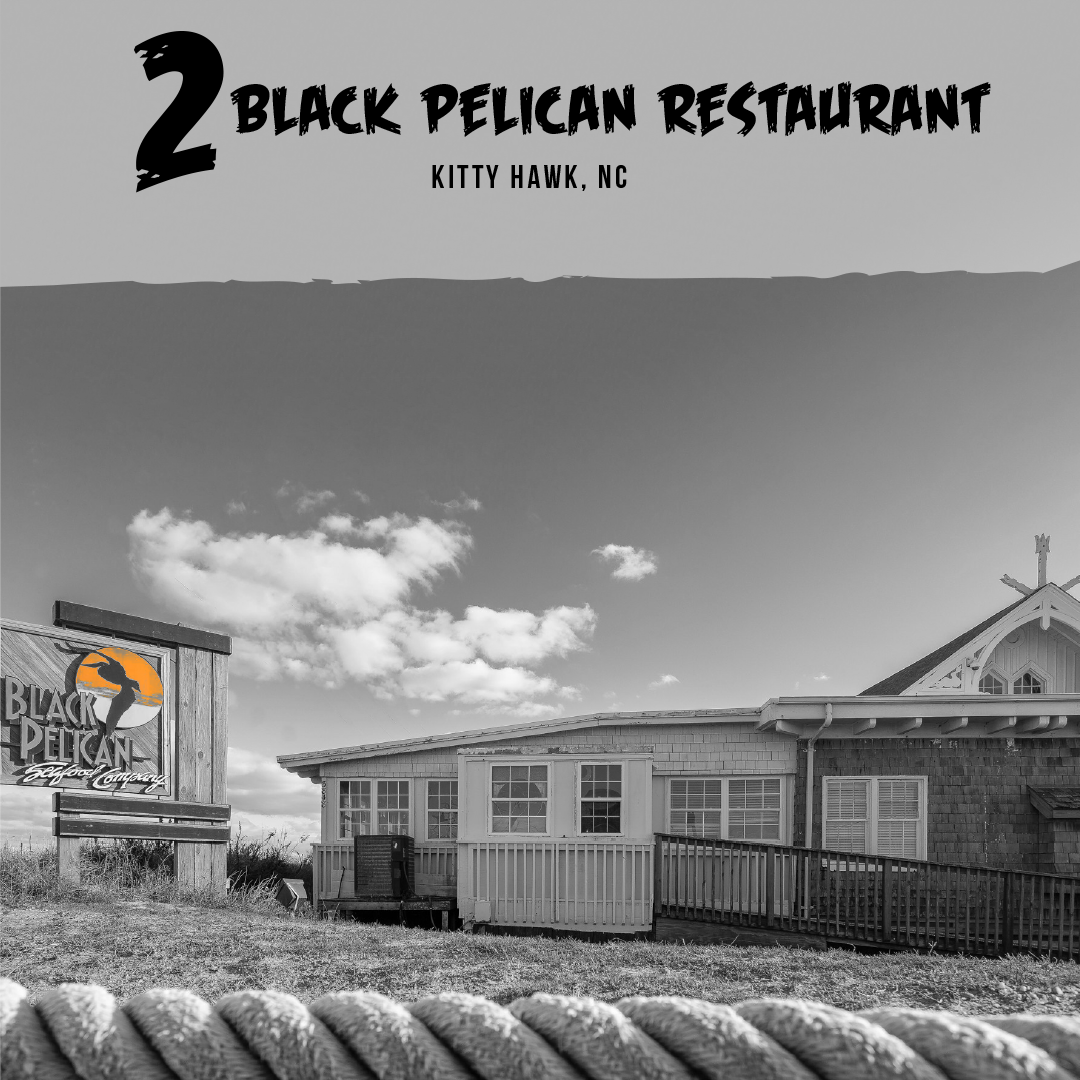 Constructed in 1874, the Kitty Hawk Lifesaving Station was one of the seven facilities of its kind existent on the North Carolina Coast.

Originally, the station was manned by one keeper and a crew of six surfmen, whose sole purpose was to rescue those who succumbed to the dangerous waters along the Banks. These courageous men continually risked their lives to maintain a routine patrol of the restless Atlantic shoreline.

But there was one young surfman by the name of T.L. Daniels, who constantly disrespected his captain and the work they were doing. Finally, in July of 1884, the captain had enough, and shot Daniels dead with a revolver.

With no witnesses around, the captain buried Daniel’s body at sea and the courts cleared him of any wrongdoing. Thus, he was never tried for the murder of Daniels.

One of the oldest restaurants on the Outer Banks, The Black Pelican, now occupies that same lifesaving station where Captain Hobbs shot T.L. Daniels. Locals say that the spirit of the young surfman still haunts the building. 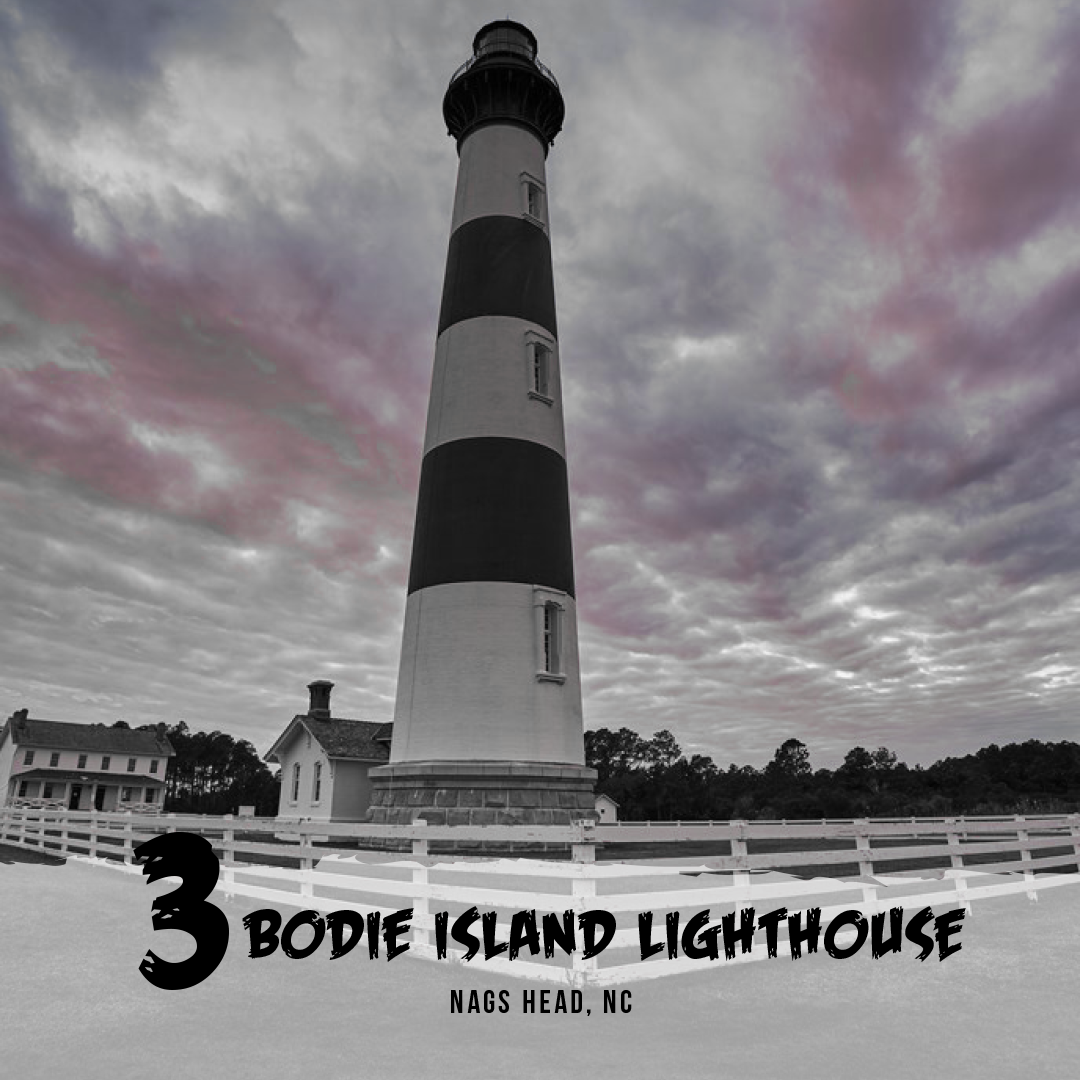 The famous Bodie Island Light House was abandoned twelve years after its original build in 1847 due to a poor foundation. The lighthouse was eventually rebuilt in 1859, but only to be blown up by Confederate troops in the early 1860’s. However, the gate keeper’s cottage has remained all these years, and so has the ghost of a lingering spirit known to locals as “Gray Man.”

The mysterious “gray” man was believed to be killed in the early 1900s, when an abrupt storm hit the beaches surrounding Bodie Island. He appears as a misty apparition, and has been seen walking the coast and roaming the lighthouses along it. 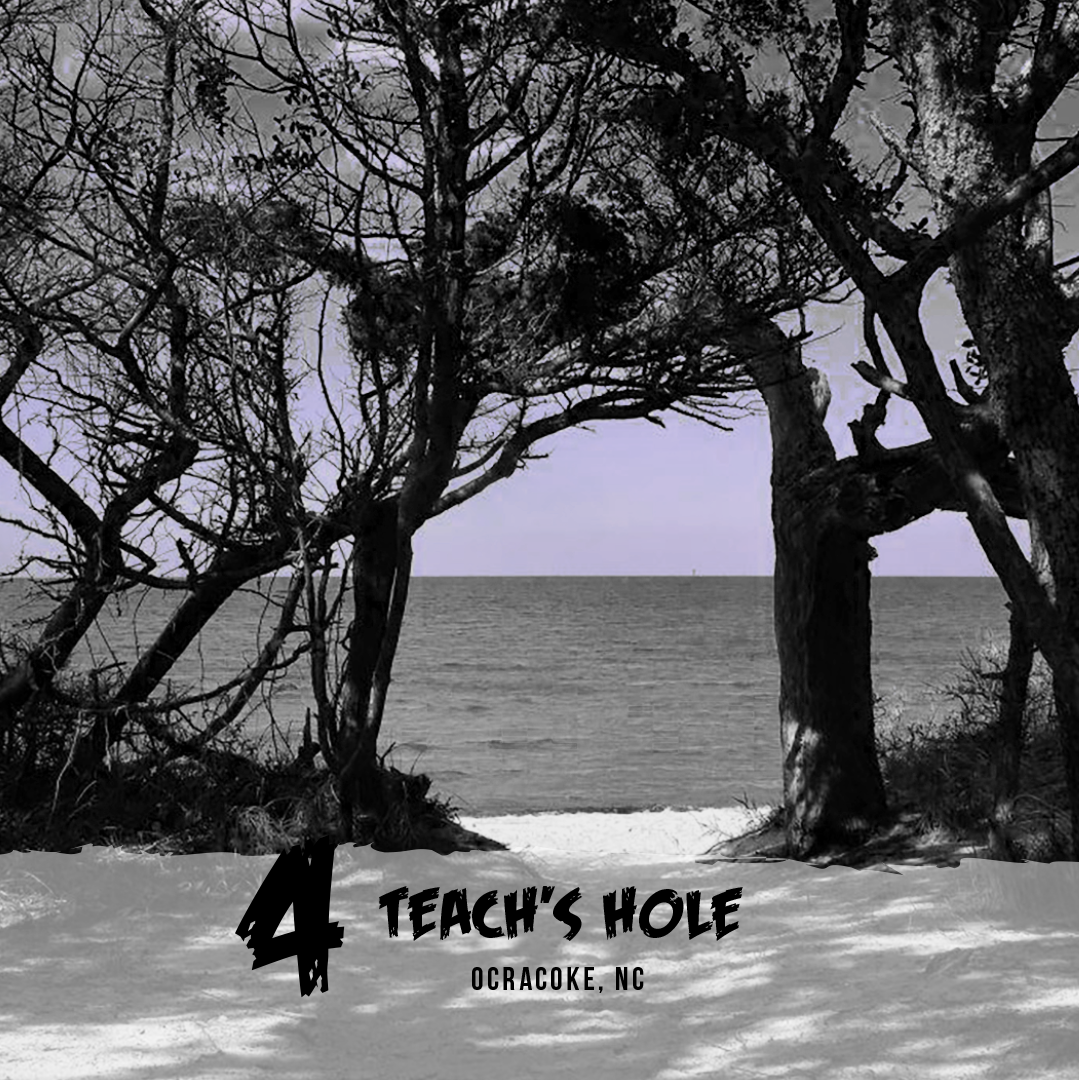 TEACH’S HOLE – The Ghost of Blackbeard

Edward Teach, better known as Blackbeard, is notoriously marked for being one of the most violent and ruthless pirates of all time; and it just so happens that his favorite cove is located on Ocracoke Island.

Now known as Teach’s Hole, the pirates beloved cove would eventually become the site of his brutal murder.

On November 22, 1718, Lieutenant Robert Maynard and Blackbeard met at Teach’s Hole for their final battle, where it is said that Blackbeard was shot five times, stabbed twenty times, beheaded, and then casted into the ocean. Many claim that his headless body treaded to stay above water for hours before finally dying.

After the execution, there have been many reports of the headless Blackbeard seen wandering around Teach’s Hole, searching for his missing head with a lantern, and swimming around in the cove. 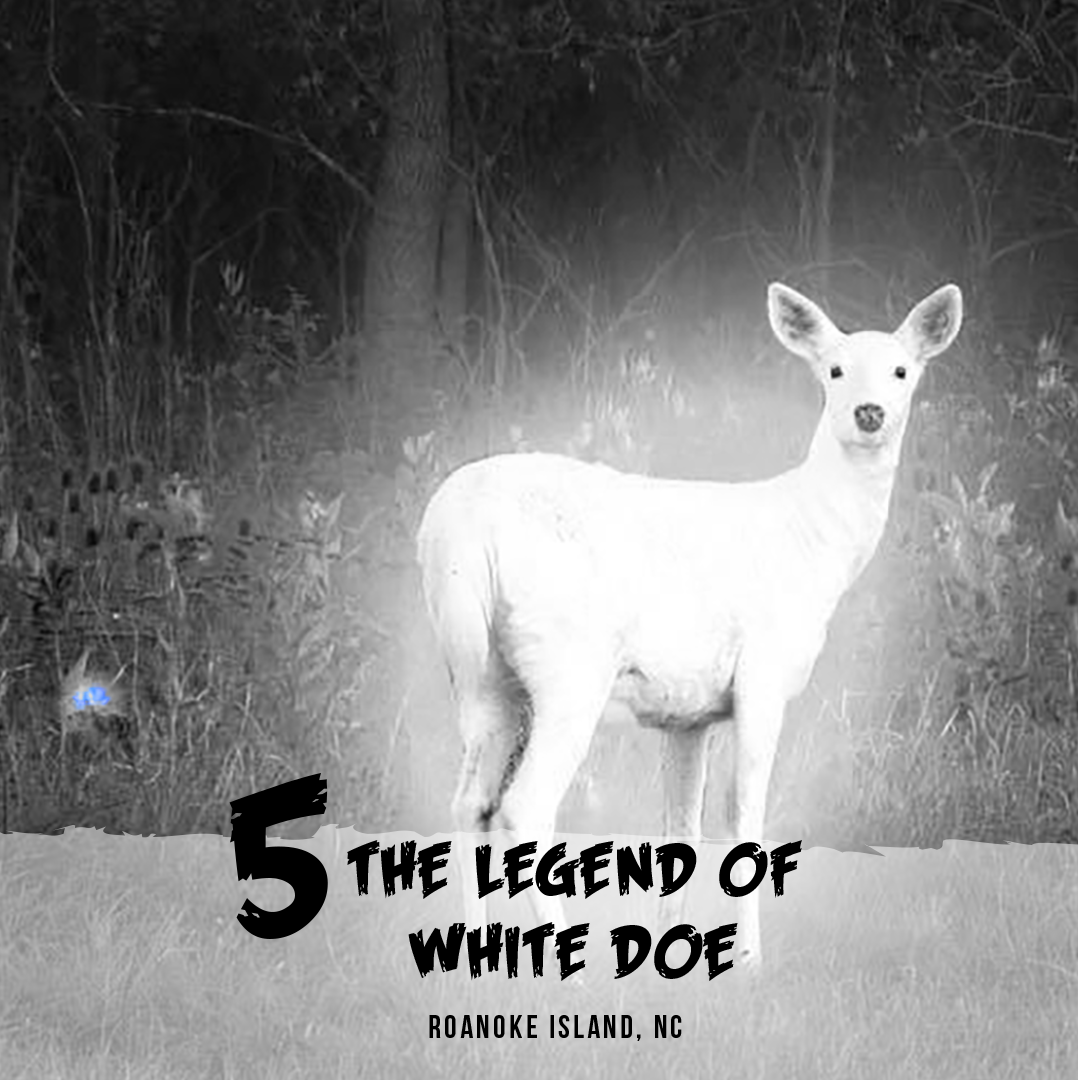 THE LEGEND OF WHITE DOE

In 1587, over 100 men, women, and children journeyed from England to Roanoke Island in hopes to establish the first English settlement of the New World.

That same year, Eleanor Dare gave birth to the first ever English-born child, Virginia Dare. Virginia was daughter to Ananias and Eleanor Dare, and granddaughter to Governor John White.

Nine days after her birth, White set sail for England in an attempt to obtain assistance for the colonists. Three years later on August 18, 1590, he returned for Virginia’s third birthday, and the found the colony completely abandoned.

There are many theories as to what happened to the colony all those years ago, but thing most agree on is that the ghost of Virginia Dare haunts Roanoke Island in the form of a white doe. Many locals and area visitors state that they’ve seen the white doe wandering the island from time to time. 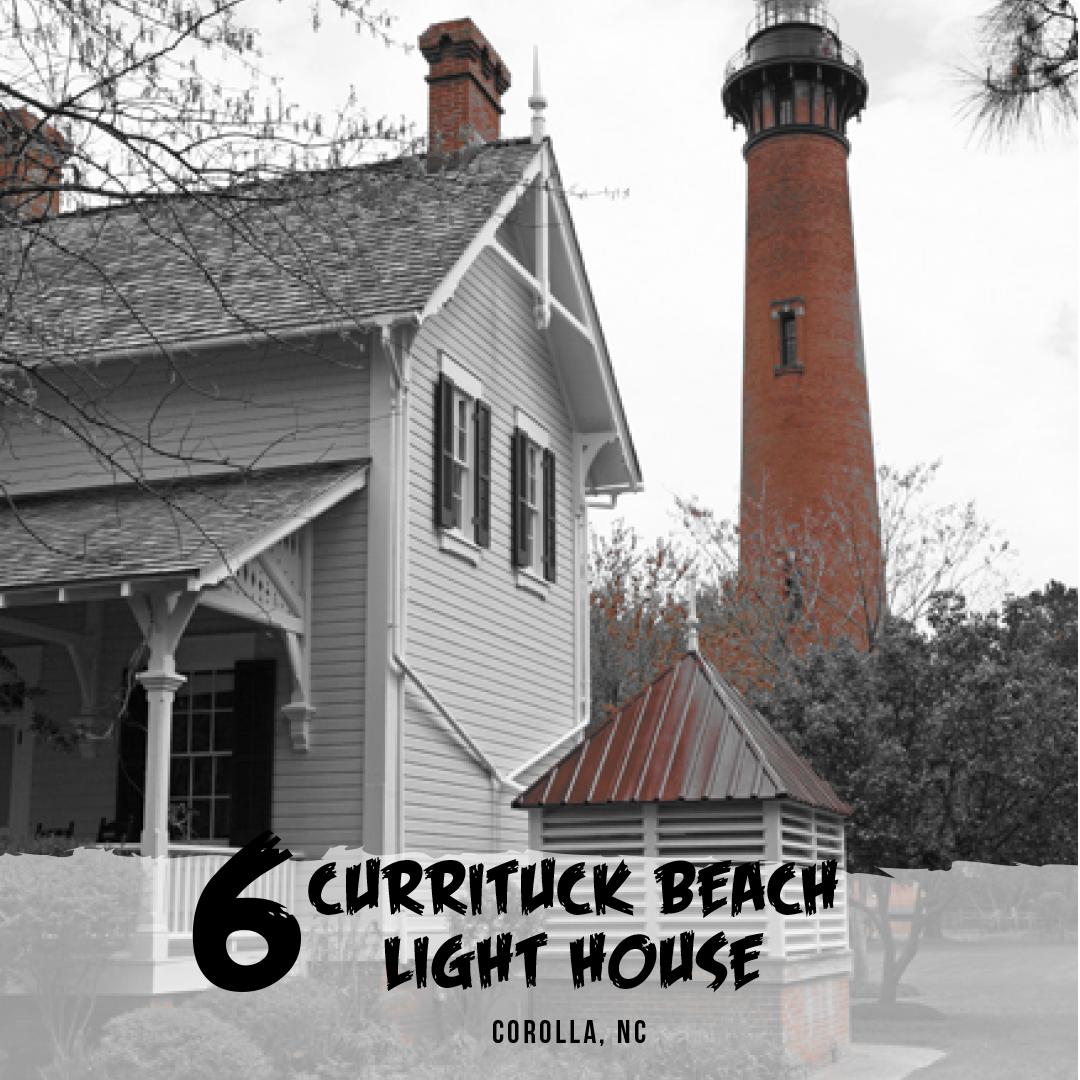 A number of unfortunate events related to the Currituck Beach Lighthouse have proved this site to be one of the spookiest, but at the start of it all is the tale of the Lighthouse Keeper’s Daughter.

Just after construction of the lighthouse was complete, it’s new Keeper and his family moved onto the property and settled into their living quarters. Their daughter, Sadie, slept in what is referred to as the north bedroom of the cottage.

Sadie very much enjoyed playing on the beach, and often did so for hours on end, alone. Her mother and father thought nothing of it, until the day she didn’t return.

Panicked, her mother and father searched endlessly for her, but when they finally found her the next day, it was too late. Her body had been washed up on shore, and the cause of death was marked accidental.

In the coming years, reports of seeing a little girl’s ghost were made, and rumors began to spread that the keeper’s cottage was cursed. Several others were unexpectedly stricken with illness, misery, or death – all of whom slept in the north room during their stay. 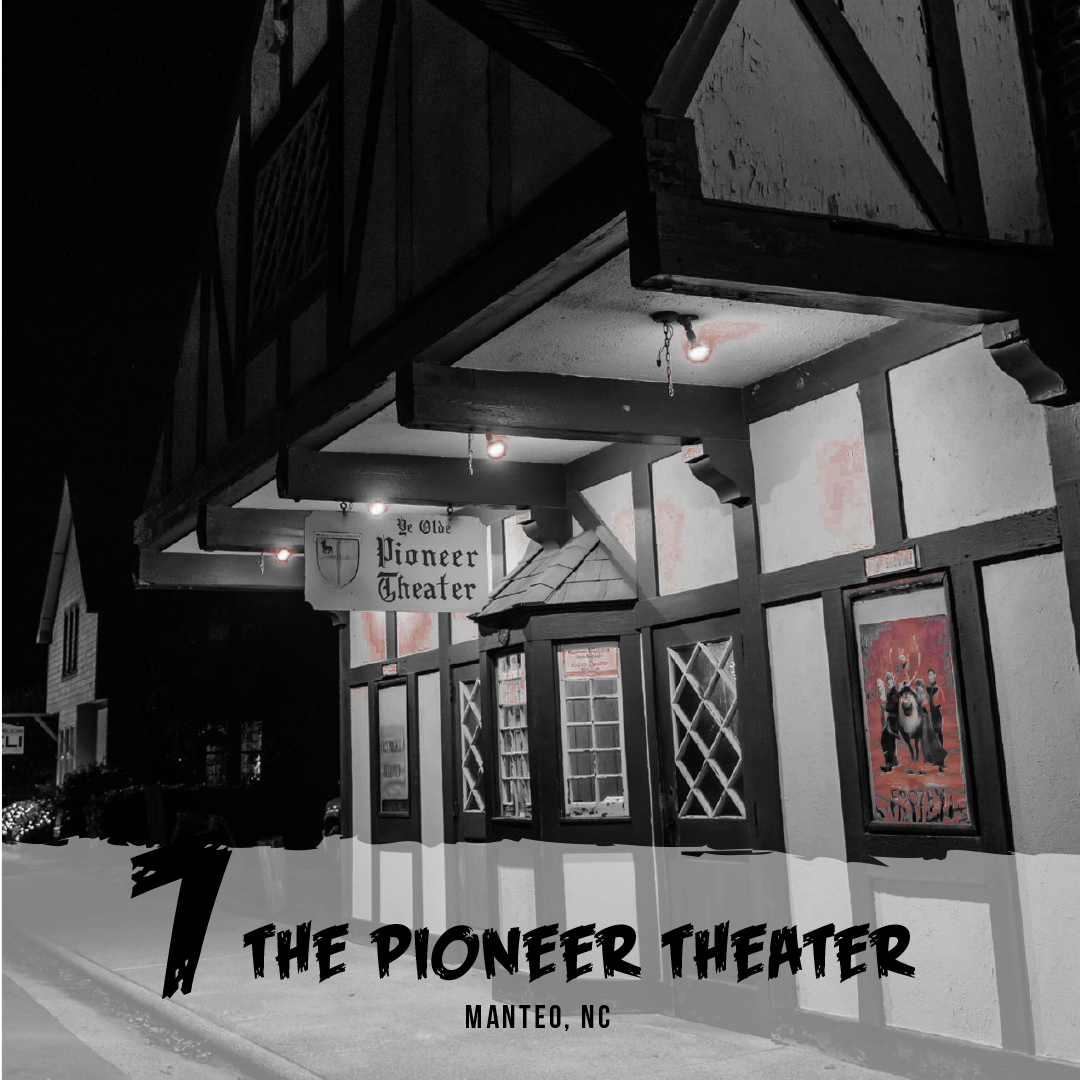 Built in 1918, there’s no question that Pioneer Theater is a landmark structure on Roanoke Island. Owned and operated by the same family after all of these years, the theatre broadcasts movies once a night each week, 12 months out of the year.

Some Roanoke Island locals believe that former family members haunt the old movie theatre, and continue to watch over the place, demanding people be respectful to the rules of the theater. Locals say that a ghost will knock your phone out of your hand if you try to use it during a screening.

Regardless of whether or not you believe in the Pioneer Theater’s haunting, you’d be hard-pressed to find a movie theatre with more character and charm in eastern North Carolina. Plus, tickets are at least a few dollars cheaper than what you’d pay at most every other movie theatre in the area.