Previous Next
Best Shelling Beaches on the Outer Banks 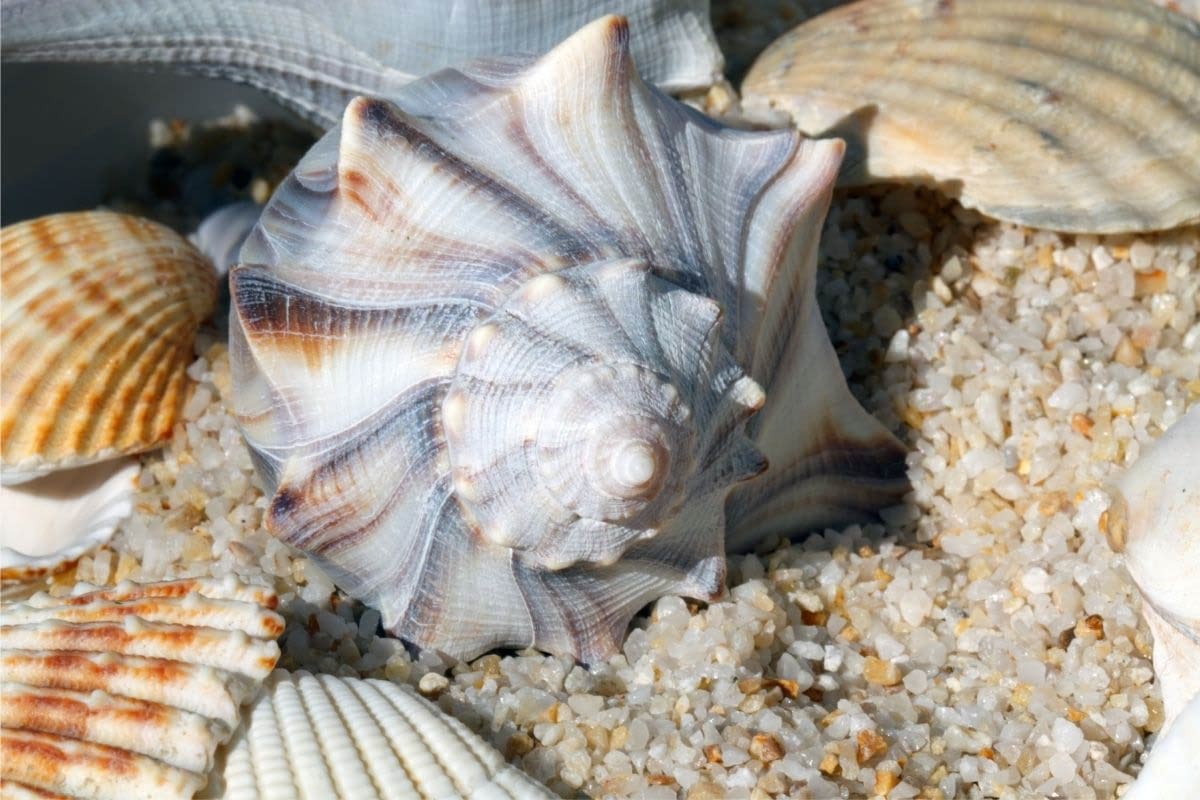 Beachcombing is a local tradition on the Outer Banks, and is one of our most enviable pastimes. Shelling and hunting for sea-glass can be tricky, but rewarding.

While some lounge in the pool or spend their days building castles in the sand, there are those who are up at the break of dawn to get down to the beach first, pre-foot prints in the sand to scour the area for treasures. These prizes may come in the form of seashells, sea-glass, sea-pottery, lightning sand (fulgurite), bits and bobs from the more than 3,000 shipwrecks off the Outer Banks like old medicine bottles and even coins. But finding these hidden treasures on the OBX beaches takes dedication as they aren’t as plentiful as say some Florida gulf beaches.

This list is considered a starting point as one day you may stumble upon a low-tide honey hole and go back the next and it has completely disappeared, reclaimed by the sea. But what we’re about to share has been some shelling hot-spots that given up at least one Instagram worthy bounty. A couple days after storms is ideal, but really you can’t go wrong whenever you spend time at the beach.

All Outer Banks beaches offer you the possibility of finding something special. Let’s explore a few: 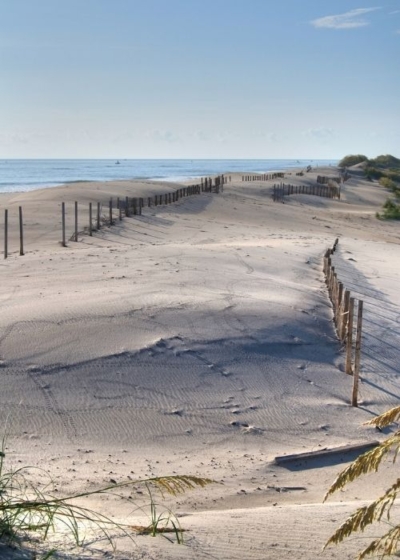 If you had the chance to make it to Shelly Island then you would have treasures galore, lightning, channeled and knobbed whelks, even the state shell of North Carolina, the Scotch Bonnet… but it’s now gone. Like many of the sandbars they come and go on these Outer Banks due to the strong off shore currents. But the trip down the beach toward the piece of land formerly known as (or close to) Shelly Island, also known as The Point, is one of the best shelling beaches in our opinion. But it does come at a cost as a beachcomber, you’ll have to climb under a lot of fishing poles!

If you don’t have a permit to drive on this beach, public parking is available for the Cape Hatteras National Seashore beach at Off Road Ramp 43. It’s then a short distance to the beach, but this is where you start and walk the mile or so toward the point. This is great shelling.

South Beach, or “The Hook,” is the shoreline that is situated just south of Cape Point. It is accessed from Ramp 44-45. It’s a rough beach as it intersects the Labrador Current and Gulf Stream, so you may see a lot of surfing going on. It’s a nesting beach, so can it is closed seasonally when the American Oystercatchers are busy there. Whelks and the rare queen helmet may be discovered here.

In general these are great beaches to comb, as they have fewer people and a very shallow seabed which can toss and tumble some lovely shells right at your feet! Go early while everyone is still comfy and cozy in their beds. You’re likely to see more dolphins and a killer sunrise to boot. Some of the prettiest olive shells can be found here, large whelks, and you’ll rejoice if you find a complete angel wing, although typically you’ll only see broken and partial angel wings.

Coquina clams are the tiny colorful shells you will find here by the hundreds, but it’s also home to some fine hunting in and along the low and the high tide line. You’ll probably find “Baby’s ear” moon snails (the flatter and smaller moon snail variety) and razor clams. Maybe some pretty coral fragments. After you park you can head in either direction along the beach. There is a restroom with showers here as well at milepost 22, just 8 miles south of Nags Head.

Just as the surf is high, so are the goodies found on the beaches of Kitty Hawk. Some days you will find great driftwood planks (perfect for crafts), the random piece of colorful sea glass and even some small sun-bleached sand dollars. Usually there is a nice variety of scallop shells. You never know what will wash up on this beach. You can park in a few different beach access parking lots, some with porta-potties, but the Kitty Hawk Public Bathhouse has parking and restrooms at milepost 4.

You will find a gazillion ocean quahogs (large clam shells), giant cockles and oyster shells near the Oregon Inlet (N side of Pea Island), there is a parking lot there for the new fishing pier from the old Bonner Bridge with porta-potties. You can also park a little bit down Highway 12 a ways near one of the wildlife viewing areas, or the Visitor Center (bathrooms) and you’re likely to uncover some goodies. Be careful not to park on soft shoulders/sand or you may be there for a long time.

If you like moon snails or shark’s eyes, you’ll find plenty here, and the occasional completely unbroken whelk. Some of the best sea-glass (mermaid tears) and lightning sand (fulgurite) can be found on Pea Island in little pebble beds at low tide. It’s still up for debate, as some believe the low tide holds the bounty, and some believe that the strength of the incoming high tide brings the treasures ashore like huge whelks. 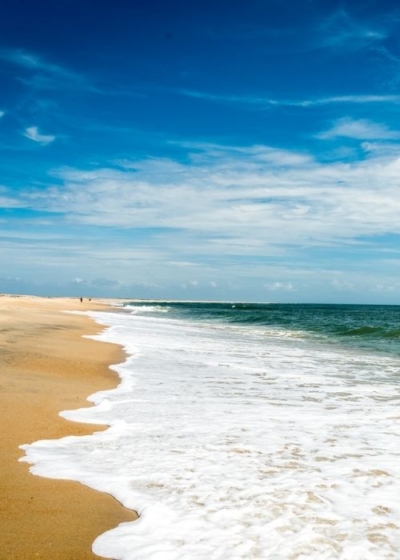 Outer Banks.com shares “The 4WD beaches of Carova stand out both for their limited accessibility and the make-up of the shoreline. Generally, this stretch of beach has a shallow, gradually sloping ocean floor, which allows more delicate shells, like augers or olive shells, to wash up on the beach without any damage. This is combined with the fact that Carova is difficult to get to, leaving miles of beaches relatively untouched by beachcombers. The best time to go is during the shoulder and off-seasons, when tourism is at its lowest, and the beaches are generally untouched and ripe for the picking.”

It’s awesome you are shelling and beachcombing. It never hurts to pick up some debris you find as you meander along (just bring a little bucket or stuff your pockets to help carry out.

If a sand dollar is fuzzy it’s still alive, or if you find any shell that is occupied, please place it back in the water for the tide to retrieve.

And importantly, if you see a turtle or a nest be sure to let N.E.S.T. (24 HR. HOTLINE 252-441-8622) know as they have a shore patrol looking out for the turtle nests and injured turtles, they will carefully transport them to Sea Turtle Assistance and Rehabilitation (STAR) Center at the Aquarium on Roanoke Island for rehabilitation.

Dogs make great shelling buddies, be careful as sand gets hot and their pads will burn, bring extra water, sunscreen and a hat.

Here is a very useful site that will show you amenities and how many parking spaces at each beach access, with photos, bookmark this site.

Also, if you have a chance, you may enjoy a visit to the Graveyard of the Atlantic Museum in Hatteras and the Hatteras Island Ocean Center. Check out this article with useful tips for finding OBX sea glass.

Find your dream home on the Outer Banks.